Generally speaking, measuring vapour permeability involves applying a condition of high humidity and a set temperature to one side of a sample material and then measuring how much of the vapour passes through, or accumulates, on the other side.  Originally this required weighing the gain in weight of a vapour-absorbing material in the dry part of the test rig, but modern instrumental techniques use a variety of different sensor types to measure the amount far more quickly and cost effectively.  The sensor effectively counts the number of vapour molecules that pass through the sample or barrier, often measuring the permeability in as little as half an hour. Some designs are also capable of measuring extremely low leakage levels, which are unrelated to diffusion processes.

With the accumulation technique the sensor is placed inside the swept gas half of the chamber. At first the chamber is flushed with the purge gas, normally nitrogen. Test gas is passed through the other side of the sample chamber, normally venting to atmosphere, but it can also be lightly pressurised to emulate the pressure inside an airship. Eventually a low point is reached in the sensor concentration, when the purge gas flow is stopped. After a short delay, the test gas passing through the sample increases the concentration of gas in the chamber, and the gradient of this increase is proportional to the permeation rate.

In one sense this takes the process one step further by only measuring the accumulation phase.

In cases where you need to place a sample chamber in a remote location, such as a kiln, pressure chamber or freezer, the remote chamber is supplied in an open frame with the vapours piped to and from the main instrument. 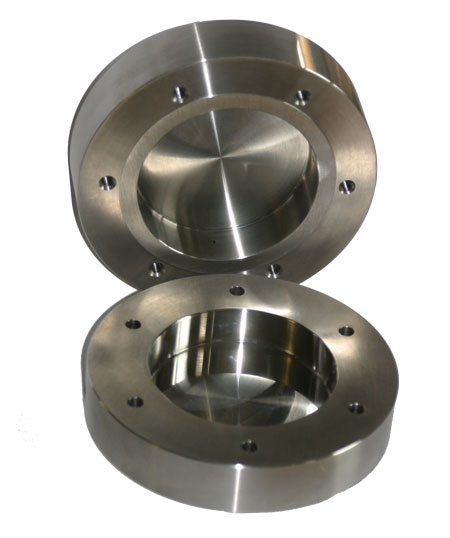 A common feature of many vapour permeability test methods is a test chamber which has the ability to clamp samples between the separate halves of the chamber. The quality of the seal is critical to achieving accurate results. Chambers are typically circular in shape and isolate the two sides of the sample from both the atmosphere and each other. These can be adapted to test valves, seams, complete structures - or even pizzas! There is no practical limit to the size that can be measured, although a typical size is 50cm².