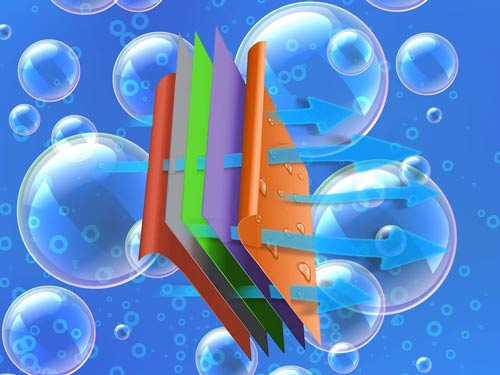 The very wide set of different units that are used for vapour permeability often make it incredibly difficult to compare samples, gazes and results. Not only are different sets of units used in different geographical regions, but also in different applications!

A material does not have a single vapour permeability for all gazes / vapours the transmission rate depends critically on the specific vapour, and sometimes on a vapour's specific isotopes. For example, water vapour may flow easily through one material, but that same material may put up much greater resistance to another vapour - such as oxygen, carbon dioxide or a hydrocarbon. The pressure difference of the vapour across the material can also make a big difference, as can temperature. Thus, the vapour permeability of a material is given for specific materials at specific temperatures, specific material thicknesses and specific vapour partial pressures.

In an effort to clarify the differences between the units we hope the following information is useful though, in a note from the lawyers, although we believe all of the information is accurate, you use these conversions entirely at your own risk

The normalized units for vapor permeability are called the vapor transmission rate, and are expressed as g mm/m2 day in standard SI (System International) nomenclature. However, in practice, for largely historic reasons, a wide and confusing variety of different units are commonly used.  This page gives the conversion factors between these vapour permeability units Please not that temperature is a major factor in the permeation rate and it should always be quoted.

According to the definition given in EN 31092:1993, water-vapour permeability is "a characteristic of a textile material or composite depending on water vapour resistance and temperature
Technically the vapour permeability of a material is given by the equation

Effectively a moisture vapor transmission rate (MVTR) is a measure of the passage of vapor through a material (such as a vapor barrier, film or fabric) of a given unit area per unit time under pre-specified temperature and humidity conditions.

The lower the MVTR the smaller the amount of moisture passes through in a given time.


The Units conversion tables below are displayed as a graphic so that it works on all devices. A PDF of it, thogewther with the information above can be downloaded below 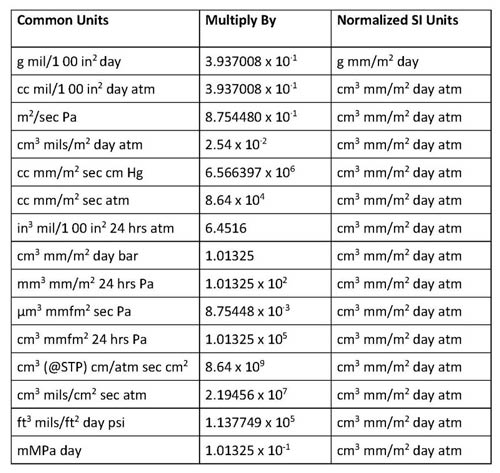 Note 1. To convert units in the first column to units in the heading multiply by the factor given at the intersection of the row and column
Note 2. This was the term used by the building industry
Note 3. No conversion from temperate to tropical is shown for reasons given in clause 46 of BS 2972 : 1975
Note 4. The symbol gr refers to grams

Disclaimer: Although every effort has been made to ensure the figures are accurate, you use it at your own risk