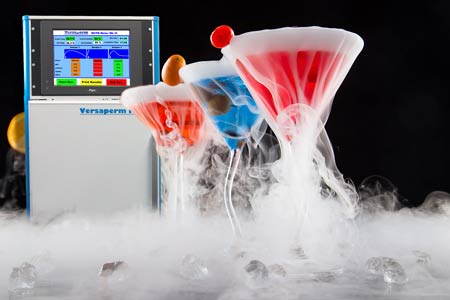 Measuring the vapour permeability characteristics of refrigerant gasses has assumed critical importance due to the rapid expansion of this market and sheer volume of gasses used. Sales of these gasses are expected to reach USD 31.0 billion by 2023 and the market is growing by over 6% year on year. This enormous volume highlights the need to contain the gasses effectively and the key lies in reducing the amount that permeates through the tubes and containers that are designed to hold them.

Historically, early refrigeration devices relied mainly on sulphur dioxide, methyl chloride, ammonia, methyl formate, chloromethane or dichloromethane. However the first three of these are toxic and their use quickly died away. CFCs (chlorofluorocarbons) started to be introduced in the late 1920s and 1930s but took off in the1950s as their cost dropped. The increasing regulations of the 1970s saw the decline of the ozone-depleting CFCs together with the rise and fall of both FCs (perfluorocarbons) and HCFCs (hydrochlorofluorocarbons). These matched the arrival of a new generation of refrigerant gasses. Many of these are listed in the Wikipedia link below.

FCs and HFCs were both covered under in the 1977 Framework Convention on Climate Change - the Kyoto Protocol.

Measuring the vapour permeability of refrigerant gasses has become significantly easier over recent years due to technical advances made in both measuring systems and sensors. A common issue with the permeability of theses gasses is that they are particularly dependant on the temperature and pressure for many of the materials that are used - so it is often necessary to use vapour permeability equipment that has been designed to control these conditions.

Refrigerant gases can be found everywhere, in air conditioning, in industrial, automotive, commercial and many consumer based applications.  Although relatively modern refrigerants such as ammonia, tetrafluoroethane, propane and carbon dioxide are considerably less damaging than the CFCs they have largely replaced, leakage of these gases is both an environmental concern and also reduces the effectiveness of the refrigerant system.

Our latest generation of vapour permeability measurement systems can take highly accurate measurements in as little as 30 minutes in some cases. These are in the parts per million (PPM) to parts per billion (PPB) ranges, depending on the physics of the gas and material under test. They also produce highly repeatable results.

The equipment can measure the permeability of each tube, seal, joint, reservoir, material or components either separately or together as a complete refrigeration system. Pressure and temperature can both be controlled and we offer the ability measure the permeability for all of the refrigerant gasses (and more) that are currently used, we can also measure mixtures of gases - giving results for each separate gas (and the gas as a whole) with just a single measurement.

An array of different available sensors using different physical principals, enable you to characterise an ever expanding range of materials, compounds, containers, products and laminates.

The system can use numerous measurement techniques but the most common is the swept gas system where the test gas is passed over or through a tube, or over one side of a sample with a carrier gas, such as nitrogen, on the other side. Both the test gas and the carrier are flow-controlled. As the refrigerant permeates through the material it is swept up by the carrier gas and delivered to a suitable sensor. Once conditions stabilize a measurement can be taken and the test is complete.

Some modern refrigerants, including ammonia (R717) and carbon dioxide, although they don't deplete the ozone layer can still both cause environmental damage and Global Warming if they escape to the atmosphere, creating a strong case for only using appropriate and tested materials to ensure they don't escape into the environment. These have achieved widespread used in the air-conditioning systems of buildings or sport and leisure facilities. They are also extensively used across food, marine, pharmaceutical, automotive chemical and industrial applications.