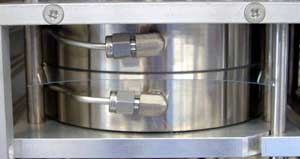 In both methods the plastic sample is fitted as a barrier between two chambers in a gas transmission cell. One of the chambers is filled with the test gas at a specific pressure. The second chamber is at a lower pressure allowing the gas or vapour under test to permeate through the barrier.

In the manometric test method the pressure chamber is initially evacuated and the transmission or permeation of the gas through the plastic barrier is measured by the increase in pressure.

In this system the lower pressure chamber is maintained at a constant (usually near atmospheric) pressure and so the vapour permeability of the gas can be measured by a change of volume.


Note on the consistency of this technique

Tests using these techniques, according to the standard, has shown that results “exhibit a strong dependence on the procedure being used, as well as on the laboratory performing the testing”.

At Versaperm we feel that this is probably partially due to the differing ways laboratories adhere to protocols, the sensitivity of these techniques due to exact environmental conditions, the history of the sample as well as the overall sensitivities of the techniques.  Also vapour permeability is affected by factors not explicitly included in the test such as moisture content, plasticizer content and nonhomogeneities.

rHowever, we have found that our own Mark V range of permeability meters offer good consistency of results as well as correlations to other techniques.

This standard does not cover testing seals involved in packaging applications.