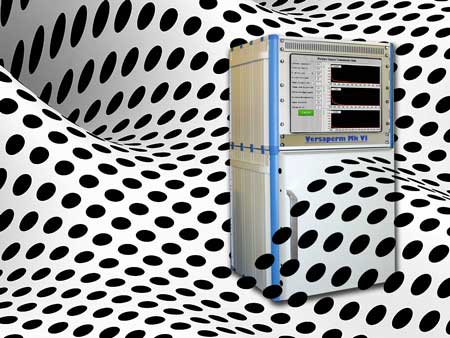 The law can be expressed mathematically in many forms, including :-

Alternatively it can be expressed as

How accurate and how valid is Fick's First law?

Fick’s law was developed empirically rather than theoretically, however it is very precise in normal use because simply because molecules are very small vapours can be considered as continuous rather than statistical, even in cases where the volumes of the vapours are minute.

However Fick can only be applied to systems that are in a steady state and the system is in unchanging. However, measurements can be facilitated by factors that do not effect Fick's law - such as convection air currents, that assist in spreading particles and sweeping them past sensors.

In situations where situations are changing, for example while pressures are being brought into balance, Fick's Second law can be applied.

Fick's 2nd law of diffusion states that the rate of accumulation (or depletion) of concentration within the volume is proportional to the local curvature of the concentration gradient.

It is expressed mathematically as a partial differential equation:-

In two or more dimensions the Laplacian Δ = ∇2, is required to generalises the second derivative leading to

The you tube video ( https://www.youtube.com/watch?v=iOHFrtCxAxc&t=2s )+ is useful in explainning Fick's law made by Texas A&M: Intro to Materials. It is relevant to all fluids such as liquids and gases / vapours.